If the antenna/tower is located in any of the following environments, a separate Environmental Assessment (EA) must accompany each construction permit and if requested by the FCC through authorization conditions or otherwise, when the authorized facility is licensed:

The FCC uses a threshold of 200 microwatts per square centimeter (µW/cm2) for controlled environments (where access is limited only to authorized persons) and 1,000 µW/cm2 for uncontrolled environments (where there is access to other than persons working on the radio equipment or anything else within the immediate area of the antenna/tower).  Broadcast stations that can’t meet the 200 µW/cm2 guideline must limit access to the area through fencing or locked doors that cover the area that receives this much exposure.  Signage warning of RF exposure would need to be placed on the fencing or doors surrounding the area where the exposure guideline is exceeded.

If the LPFM antenna is the only one on the tower

For an LPFM station operating at the maximum effective radiated power (ERP) of 100 watts vertical and 100 watts horizontal, the FCC has simplified the RF Exposure guideline by requiring a minimum of 6.5 meters (21 feet) between the base of the tower or mast and the lowest part of the radiating antenna. It must also maintain a distance of 6 meters (20 feet) from the radiating part of the antenna to any person (such as a low level tower very close to an adjacent building). This means for a rooftop antenna, the antenna would need to be placed 21 feet off of the roofline to meet the FCC’s simplified guideline.

NOTE: For antennas located near airports where FCC structure registration is normally required, there is an exception to the registration requirement if the overall height of the antenna structure is less than 6 meters (20 feet) above the highest point of the building.  LPFM stations seeking to use the “20 foot rule” would not meet the simplified guideline as mentioned on the FCC worksheet.  In those cases, a simple exposure study using FM-MODEL could still demonstrate that despite the antenna being lower than 20 feet from the roofline, it would not reach any person in an occupied portion of the building.  It can also show compliance in some cases where the LPFM station is operating at less than 100 watts ERP or is using an antenna with only vertical or only horizontal polarity (as opposed to circular polarized).  REC can assist in those showings.

LPFM antennas on towers with other FM or TV broadcast stations

If the LPFM antenna shares a site with other FM or TV broadcast antennas, then the minimum distance is 22 meters (72 feet) per the simplified LPFM guideline.

If the height on a shared tower will be less than 22 meters (72 feet), then the RF exposure will need to be evaluated to determine if the addition of the LPFM antenna would require new fencing or expansion of the existing fencing.  This is done through looking at each facility and using the FM MODEL tool to calculate the exposure. Remember, when looking at facilities that have both a vertical and horizontal ERP, both values must be considered when determining the ERP for the evaluated facility.

TIP: You can use FCCdata.org to find antennas on a tower by bringing up your station’s pending or granted construction permit or the call sign of any other FM broadcast station you know is on the tower and then click on the “Tower Payload” link to see the stations we show on the same tower.  You can then view the technical parameters, including the horizontal and vertical ERP as well as the number of antenna bays for each of those facilities.

Certification of meeting the guidelines

Whenever a construction permit (Schedule 318), license to cover/modify (Schedule 319) or renewal application is filed, the applicant must certify that the facility meets the environmental impact and RF radiation guidelines described.

In certain situations, the FCC may include a condition on the construction permit that the license application must include a showing of RF exposure limits being met.  This normally happens if there are multiple antennas on a rooftop.  REC Networks can assist with this showing on most situations. Some situations may require a qualified engineer on site to make readings.

Periodic review of meeting the guidelines

On May 3, 2021, a Report and Order went into effect involving RF exposure guidelines.  For broadcast, the actual exposure guideline was not changed, but broadcast licensees (including LPFM) are encouraged to periodically evaluate their RF exposure.  This would include assuring that the antenna meets the simplified guidelines above and if not, then additional measures may need to be taken such as fencing, locked doors and/or the installation of signs.

The worksheet considers the low point the point where the base of the mast/tower meets the roof (support structure).  For an antenna not mounted on the apex of the roof, such as the second example, you still would have to measure from the radiating portion of the antenna to the nearest occupied area, which could include an attic that may be occupied.  To avoid this issue (and to avoid an additional study), continuing to base the bottom of the tower/pole at the apex of the roof would provide the best method of avoiding the second "20 feet towards any person" provision on the worksheet.  If you mount lower, it would be best to do a FM-MODEL study to show the exposure at the nearest location of a "human head". 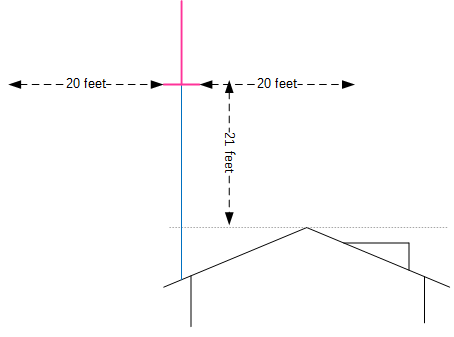 Measure from the lowest element (including the ground radials).  Note that since a vertical antenna does not operate at the "full power" that the worksheet expects, a FM-MODEL study would show compliance even if the antenna is at a slightly lower height (6 meters instead of 6.5 meters).  LPFM stations with an ERP of less than 100 watts may be able to mount lower based on a supporting FM-MODEL study.

Standalone tower in residential area (not attached to structure)

Worksheet height is measured from the ground, however, there is still the measurement from any radiating portion of the antenna to the closest human occupation.  In the example above, while the tower is 21 feet tall, there is still penetration into structures within 20 feet.  This would not meet the guidelines.  You will also need to be aware of adjacent properties.  (In reality, you would not normally do a free standing tower that low unless you are on a hillside and the antenna structure is properly fenced.)

Commercial or apartment building without stairway access to roof. 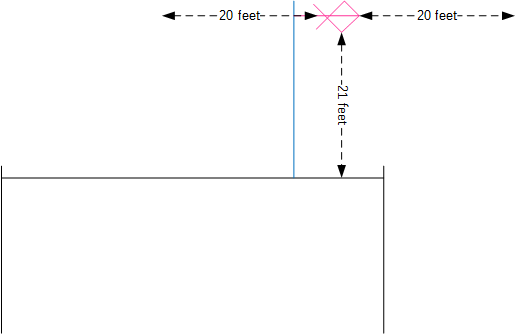 The simple way is to measure 20 feet from the roof line. 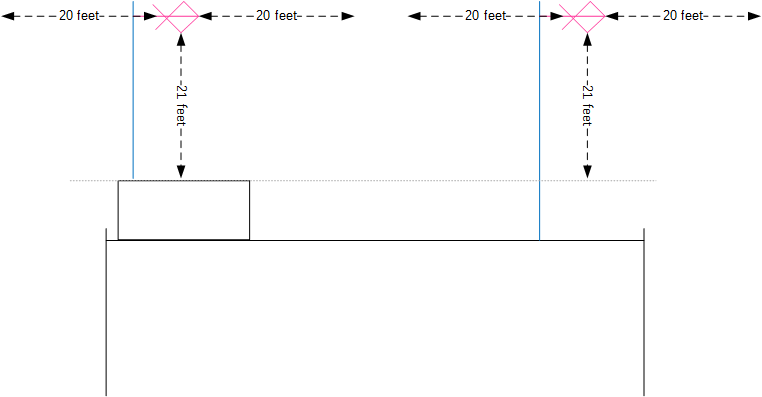 The mast on the left is mounted on the top of the equipment shed or top of stairway.  If it is 21 feet above that point, then it meets the worksheet guideline.  The mast on the right is at the same radiation center height but is more than 21 feet from the highest point on the building, so it also meets the worksheet guidelines.  You can mount it lower, but an FM-MODEL should be done.  Also, you want to assure that no part of the antenna is within 20 feet of any human head on the top floor(s) of the building.  In this case, you can keep the staircase door to the roof locked and place a warning sign on the door.  NOTE: If the antenna is mounted in a way where a radiated portion of the antenna is within 20 feet of the stairway, then an FM-MODEL will need to show that at no point in the stairway does the exposure exceed 200.

In this example, all areas that are within 2.5 meters of the base of the tower does not meet the guidelines for controlled access.  This means that at all points that are within 2.5 meters to the base of the tower, the area must be protected by a fence with a locked gate or a locked door to prevent roof access except to authorized persons.  In addition, RF warning signs must be placed the point where access is controlled.

Warning signs are placed on locations at the perimeter of any fencing or locked doors.  These signs are intended to describe the level of exposure within the designated area.  You may also (but not required to) place a sign on the tower structure itself.

Signs must contain the following information:

LPFM installations made in accordance with the worksheet standards shown above do not require signage.  Installations made where an FM-MODEL study shows an exposure of 200 µW/cm2 or less at all points does not require any signs.  The use of the green "Information" sign is completely optional.

‹ HD Radio for LPFM up Directional Antennas for LPFM ›
REC Essentials
Other REC sites
The More You Know...
REC Suggests