Updated 2/6/2020: The FCC is considering rule changes that will "normalize" the booster application process for LPFMs.  Still, if you think your station can benefit, please contact REC.

On June 22, 2017, the FCC granted two construction permits for FM boosters for LPFM stations.   These applications were prepared by REC Networks under very controlled conditions in association with the LPFM licensees who will build the facilities.  Since the news of these grants, REC has received several requests for more information on boosters.

What is an FM booster?

FM Boosters are FM transmission facilities that operate on the same channel as the primary station that it is broadcasting.  FM boosters are used to fill in gaps of coverage that are normally created by terrain.  Until June, 2017, no LPFM station had ever been granted a booster.  In fact, in 2010, an LPFM station was turned down for a booster.  However, with the 2012 rule change that permits LPFM stations to own up to two translators, REC made the argument that LPFM stations should be permitted to use a FM booster as one of their two translators.

FM boosters require the programming to be fed to it through other means.  The optimum method of feeding a booster is microwave.  This allows for the best possibility of synchronization between the primary station and the booster transmitter (usually done by delaying at the primary station's transmitter).  Using a Barix or other method of internet/Wi-Fi feeding will cause significant delays and make for a very bad listening experience.

Where can I put one?

The 60 dBu protected service contour of the FM booster must remain within the 60 dBu protected service contour of the primary station.  This means that the FM booster will use a directional antenna.  The intention of an FM booster is not to extend the coverage of a station but instead to fill in a gap in coverage in a service (contour) area that you are already entitled to.   In the full-power world, FM boosters are permitted to operate an ERP of up to 20% of the maximum power authorized in the class of service (for class-A, the maximum is 1.2 kW).  For the LPFM test cases, we considered the maximum ERP as 20 watts even though one station only could use 6 watts (KWSV-LP1) and one used 10 watts (KXRN-LP1)

The primary thing you need to be aware of is that a booster is a transmitter that is on your same channel.  There's nothing different about a booster transmitter it would no different than having a FM translator or other transmitter operating on your channel.  In other words, the ability for FM to discern the strongest signal (capture effect) will work in areas where one signal is much stronger (15 dB) than the other.  This means that an improperly designed FM booster is going to cause interference and make the experience worse for some of your existing listeners while perhaps it makes things better for others.  This is the reason why the two REC test cases were situations that involved stations blocked by medium terrain (KXRN-LP) and high terrain (KWSV-LP).

IT IS IMPORTANT TO REMEMBER THAT THE RULES CURRENTLY DO NOT ALLOW LPFM STATIONS TO OWN BOOSTERS AND ANY REQUEST FOR A BOOSTER WOULD BE A WAIVER REQUEST.

Protections to other FM stations 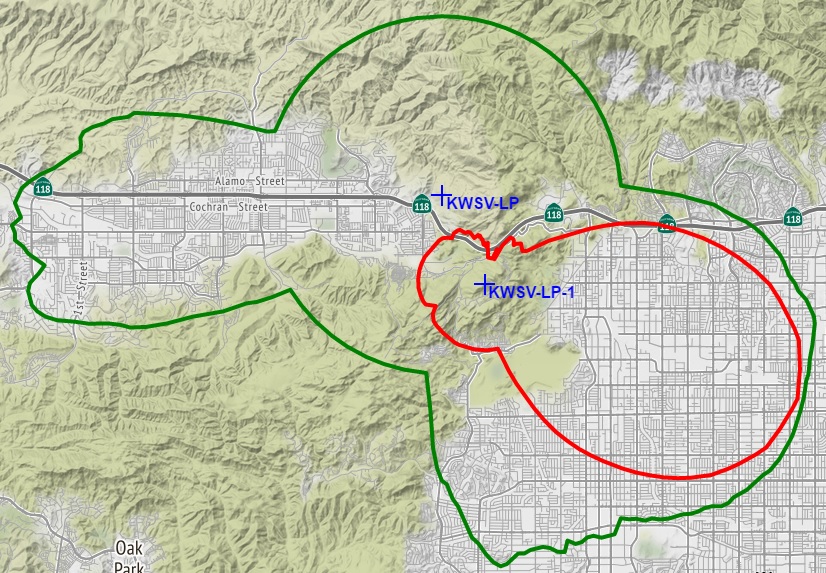 In the full-power world, there are not many rules that boosters have to folllow for protection of other facilities as their primary stations are properly spaced to not only prevent interference to other stations but also to receive interference from that other station.  As a secondary service. LPFM is much different.  LPFM stations can come inside the interfering contours of full-power stations.  In addition, subsequently authorized full power authorizations can bring full power stations closer to the LPFM to the point where the LPFM's interfering contour crosses into the protected contour of the full-power station.  In the full-power world, FM boosters have a rule that states the signal of any first-adjacent channel station must exceed the signal of the booster station by 6 dB at all points within the protected contour of the first-adjacent channel station.  In the full-power world, intermediate frequency (IF) would also need to be protected however since LPFM boosters would not run more than 20 watts, we don't have to worry about IF.

A word about waivers

The FCC will only grant waivers if there are special circumstances that warrant a deviation from the general rule and if such a deviation will serve the public interest. (Northwest Cellular, 897 FCC 2d 1166).  In the test cases, we made a significant showings of special circumstances around the hard terrain over a portion of the LPFM station's service contour and in KXRN-LP1, we also cited a public safety aspect to further support the waiver.  You must remember, when you ask for a waiver at the FCC, you are faced with a high hurdle at the starting gate meaning that you must have a very compelling case to get a waiver of the rules.  Unless you approach the FCC with a very compelling case for your specific situation, there's a possibility that your request may get rejected.  Both of these situations involve obvious terrain with one case being a "foothill" station and the other being a textbook 5.6 km LPFM station.    REC will not consider a booster unless the following conditions are met (note, these are not necessarily FCC rules, just REC recommendations):

Planning a booster system, especially where there is not a case of obvious hard terrain is an extensive task and in some cases, is even beyond my skill set and is not for everyone.  I still believe that for 95% of the LPFM stations out there, a booster will not work for you.  Also, just saying to the FCC "well you did this for KXRN-LP and KWSV-LP, then you should do this for me.." is not going to cut it.  While citing these two grants as one aspect of a waiver request, you must have a compelling situation that will allow you to clear that first high hurdle out of the starting gate.  If you think your station can possibly benefit from a booster to help a major coverage gap in an area of your 60 dBu contour, please contact REC before attempting any filing. REC can do the filings if we feel that it may be a good candidate. Remember, REC does have reasonable fees for LPFM licensees even for the more  complex stuff.  Also, unless you have access to V-Soft, CommStudy2 or similar software that can create contours and do studies, please do not attempt this application on your own.

Other than during an application freeze, getting an FM booster can be done at anytime without having to wait for a filing window.

‹ FM Translators for LPFM stations up