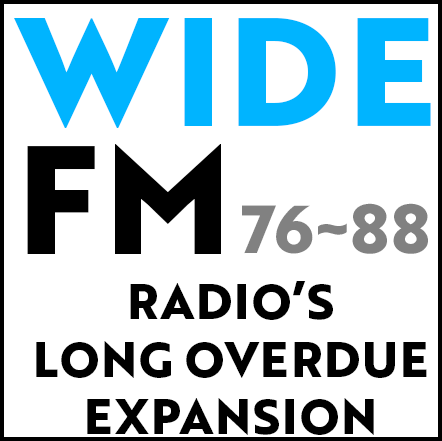 Today, REC Networks, a leading advocate for a diverse dial, has filed a Petition for Rulemaking to introduce WIDE-FM.  WIDE-FM is a comprehensive plan to create 60 new FM channels in the 76 to 88 MHz spectrum on a shared basis primary full-service and Class A TV stations as well as with foreign TV stations operating on RF Channels 5 and 6.

The WIDE-FM proposal is a byproduct of the FCC proceeding MB Docket 03-185, which mainly addresses the future of Low Power TV (LPTV) stations operating on TV Channel 6 and operating in a configuration that permits them to have a hybrid of an ATSC3 digital television datastream and an analog FM transmission on 87.75 MHz.  These services are known as "FM6" or by the more pejorative term "Franken FM".

In MB Docket 03-185, the FCC also addressed a recommendation made by National Public Radio in order to expand the FM broadcast band into the TV Channel 6 spectrum (82~88 MHz) in order to create more channels for new noncommercial educational (NCE) broadcast stations.

In comments, REC not only supported the ability for noncommercial FM use of Channel 6, but has included a comprehensive plan for implementation of broadcast services in this spectrum.

WIDE-FM proposes to reserve 20 FM channels in Channel 6 spectrum (83.1~86.9 MHz) in most areas of the country that are well outside of the noise limited contours of nine (soon to be 8) remaining full-service TV stations operating on RF Channel 6.  WIDE-FM goes further to propose that in areas where new FM stations would cause interference to existing RF Channel 6 stations, that 20 FM channels in the Channel 5 spectrum (77.1~80.9 MHz) be reserved for noncommercial educational use, subject to protection to RF Channel 5 full-service and Class A TV stations, of which there should be only 15 remaining in the country before any plan could be implemented.

WIDE-FM stations would be required to protect TV facilities within their same "Band".  This will be done using the industry standard 2 dB desired to undesired (D/U) ratio for analog to digital protection.  This would mean that the 26 dBu F(50,10) interfering contour of the proposed FM facility cannot overlap the 28 dBu F(50,90) noise limited contour of the TV facility. Protections from TV to FM, where necessary, will use the industry standard 34 dB D/U ratio for digital into analog protection.  This would mean that a TV facility's 26 dBu F(50,10) interfering contour cannot overlap the FM facility's 60 dBu F(50,50) protected contour.

For full-service FM, REC proposes that three service classes, A, C3 and C2 be available for stations.  This means that the maximum effective radiated power for a WIDE-FM station is 50 kW.  Also, the use of "FM Zones" will not be used in WIDE-FM.  The entire country would be considered as "Zone II" and therefore, the B and B1 service classes will not be used.  WIDE-FM also acknowledges the advancements in receiver technology and the fact that most radios that will be used in the service will be newly manufactured. WIDE-FM calls for no third-adjacent channel protection requirements and the ability to waive second-adjacent channel overlaps if it can be determined that the overlapped population is no more than 0.5 percent of the overlapped station's total service contour, not exceeding 3,000 persons.

Since this is empty spectrum for FM radio, WIDE-FM proposes an allotment system to accommodate the applicants in the first series of filing windows.  Each Census designated community with 1,000 persons or more were ranked by reverse population order and an attempt was made to place an allotment following the commercial full-service spacing rules.  A total of 3,501 allotments were created for this first window series.  All applicants must file specifying the channel, class of service (or inferior class of service) and community specified in the allotment.  Initial applicants must specify service and interfering contours that are constrained to within certain radii around the reference coordinates for the allotment in order to prevent cross-community mutual exclusivity of applications.  Once the application is granted, the facility may be modified to extend contours beyond the constraints of the allotment while protecting other allotments where no FCC action has taken place.

REC's proposal for allotments in the first window series assures an orderly implementation of WIDE-FM in the empty spectrum for radio and assures that the Commission meets its statutory obligation for fair distribution of licenses between the several states and communities.  The use of allotments will prevent dozens to hundreds of conflicting applications across the band, which would result in only one winner.  The allotment system assures that there is at least one winner per allotment (more if there is time sharing).  After the initial "Homesteading Filing Window Series", the allotments will be eliminated and based on the outcome of the Homesteading Filing Window Series, subsequent filing windows will involve an open band similar to how NCE FM stations were applied for in 2007 and 2021.

WIDE-FM also proposes to limit the Homesteading Filing Window Series to only local applicants to assure that the early adopters of the service are truly local organizations.  The localism requirement would be eliminated for subsequent filing windows.

In the other channels, WIDE-FM proposes to set aside channels dedicated for LPFM use as well as make spectrum available for FM translators for the purposes of rebroadcasting the main analog or HD1 stream of noncommercial and commercial FM stations as well as the main analog or HD1 stream of AM broadcast stations.  REC proposes a limitation on WIDE-FM noncommercial FM translators that would limit the ultimate primary station to be no more than 200 miles or be in the same state as the FM translator (whichever is longer).

WIDE-FM proposes that both LPFM stations and FM translators in the spectrum use identical technical models. This assures compliance with the Local Community Radio Act of 2010, which states that licenses for LPFM stations, FM translators and FM boosters are distributed based on community need and that all three services are equal in status.  In addition to the current LP-100 service, WIDE-FM proposes LP-250 as proposed by REC in RM-11909, which calls for 250 watts at 30 meters height above average terrain (HAAT) with an effective service contour of 7.1 kilometers.  In addition, a third class, LP-250 PLUS would be available west of the Mississippi River except in California south of 40 degrees latitude.  This service would be 250 watts at 107 meters HAAT with an effective service contour of 13.3 km.  FM Translators would use the same models under the service class names FX-100, FX-250 and FX-250 PLUS.  To assure service equality, second adjacent channel protections are not required between stations of the same service.  The major change to this is that in the WIDE-FM spectrum, FM translators will be required to protect LPFM on second adjacent channels but would not be required to protect other FM translators on second adjacent channels.

WIDE-FM also proposes to set aside 4 channels for the use of extremely low power (ELP) facilities of 10 watts or less for the purposes of well organized special events, such as music festivals, scouting jamborees, conventions, religious retreats and non-seasonal sporting events.  WIDE-FM also revitalizes a 20 year old Petition for Rulemaking by the National Hockey League to permit the use of ELP WIDE-FM facilities inside of sports stadiums and arenas for "direct to fan" operations during home games throughout a sports league's season.  ELP will also have access to other channels (except those reserved in the area for NCE FM use) with a 5 watt limit.  One time special events must have a projected simultaneous attendance of 5,000 persons and seasonal licenses would require a venue with a seating capacity of at least 15,000 persons exclusive of support personnel, athletes, performers, coaches and officials.  All ELP applications will require an emergency communications plan, coordinated through a public safety agency that has jurisdiction over the event area.  The plan must show how the ELP station would be incorporated into the emergency communications plan in order to assure the public safety of attendees to the event.  ELP authorizations for one time events would be issued as permits, similar to special temporary authority where seasonal operations in stadiums will be issued as renewable licenses.  ELP operations would be tertiary in status thus protecting all primary and secondary FM broadcast services.

The implementation of sound broadcasting in the TV spectrum follows a trend that was originally started in Japan with the expansion of their FM band from 76~90 to 76~95 to accommodate AM broadcasters who specifically requested this spectrum so they can eventually shut down their AM facilities, resulting in cost savings.  Also recently, AM broadcasters in Brazil will start migrating to the 76~88 MHz band.  The ability to bring sound broadcasting comes on the fact that most of the world recognizes that low band VHF spectrum below 108 MHz is not effective for digital television.  Out of all of the nations in the world, only the United States, Canada, Mexico, Sint Maarten and Curacao have digital TV operations on the VHF low band.  All other countries have transitioned to UHF with some transitioning to high band channels between 176~216 MHz.  CITEL, a multilateral body that steers spectrum usage in the western hemisphere has recently made recommendations that 76~88 MHz should be made available for sound broadcasting in a manner that does not interfere with television use.  Some South American countries, such as Colombia have already noted this shift in spectrum usage in their future frequency plans.

Radios for WIDE-FM are already being manufactured and in some cases, WIDE-FM can be implemented in existing radios through either a menu option, a switch or through a software update from the auto manufacturer.  Otherwise, it will require the purchase of a new radio receiver.  Since WIDE-FM uses existing FM technology that is already in use in that spectrum into two major nations (and more on the way), radios will be relatively inexpensive as they will not require any new proprietary technology, only an increase in production to what is currently being delivered to Brazil.

REC has filed the Petition for Rulemaking both as a part of MB Docket 03-185 and as a separate rulemaking with the hope of getting a separate RM number assigned to it.

A website intended for the general public and those in the industry has been set up at http://wide-fm.com.

A copy of the Petition for Rulemaking and other supporting documents and tools will be available at REC Networks at https://recnet.com/widefm