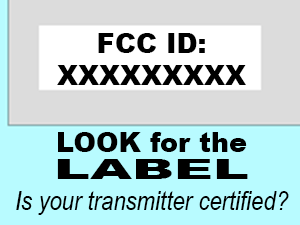 REC Networks has filed a statement with the FCC in MB Docket 19-193 to offer a compromise solution that would allow LPFM stations to use “hand me down” transmitters that were formerly in service by other broadcast and FM translator stations while still protecting the integrity of the spectrum from dangerous uncertified equipment.

In our Opposition to the two Petitions for Reconsideration filed in this proceeding, REC addressed some concerns to the petition filed by Todd Urick where it comes to permitting transmitters that have not been specifically type-certified into the LPFM service.  Currently, §73.1660(a)(2) requires LPFM stations to use certified transmitters.

In our Reply statement, REC has recognized that LPFM stations have had to miss out on opportunities to receive used surplus transmission equipment that may have been recently removed from service at a full-service or FM translator station due to changes at the station such as a digital audio chain and/or HD Radio.  As a result of having to purchase a certified transmitter would be a great economic expense for a station, especially if in the event that their certified transmitter fails and they receive a donation of a transmitter to make the change to return to the air.

In full-service rules at §73.1660(a)(1) and translator/booster rules at §74.1250(a), FM transmitters are not required to be certified but instead must meet the Supplier’s Declaration of Conformity requirements pursuant to §2.906 of the FCC rules.

In order to accommodate these transmitters and address the Commission’s LPFM specific concerns regarding using a certification process that is more geared towards consumer devices than professional equipment in order to keep LPFM “simple”, REC proposes that:

REC recognizes that many (but not all) LPFM stations are operated and/or maintained by those with documented broadcast engineering experience.  REC feels that this is a good way to assure that either a certified transmitter is used or, because of the qualification requirement, that a non-certified but type-accepted transmitter is being used under appropriate supervision.

REC has also filed a Reply to the Opposition filed by Foundation for a Beautiful Life (formerly KQEK-LP, Cupertino, CA) in which we disagree with FBL’s allegation that the FCC has singled them out through the addition of a policy which also existed for the translator interference proceeding, that, based on research from REC, shows that the FBL application that was under appeal would be the only application that could receive benefit from the rule changes adopted in MB Docket 19-193.

KQEK-LP’s construction permit was lapsed because the FCC had determined that the station never built at the authorized location.  They, in turn, built at an unauthorized location and then tried to obtain waivers through processes other than on the face of the application.  While KQEK-LP’s case is working through the courts, they decided to return to the air briefly citing COVID-19.  The FCC never authorized the station to return to the air, which generated a cease and desist letter from the FCC’s Audio Division, which FBL claims that they immediately complied.  The unauthorized operation is considered a violation of Section 301 of the Communications Act which invalidates any opportunity for FBL and the principals of their organization from applying in the next LPFM window, expected in late 2021 or 2022.  REC invites any Chinese-American organization, not affiliated with the New Tang Dynasty Television Network to apply in the next window if spectrum is still available in the Santa Clara Valley.