You may wonder why may notice that there are "open spaces" on the FM dial but you can not place an LPFM station there. This is due to the FCC's rules regarding interference protection. Let's discuss the different elements involved in determining how interference is predicted.

The FCC uses certain criteria to determine an FM radio station's service areas and interference potential by using measurements distances at certain field strengths. Field Strength can be measured in either millivolts per-meter (mV/m) or in decibels unterminated (dBu) (commonly just decibels). While mV/m is used in FM broadcasting, many of the broadcast rules are written in decibels so this is what we will use. The higher the decibel number, the stronger the signal. 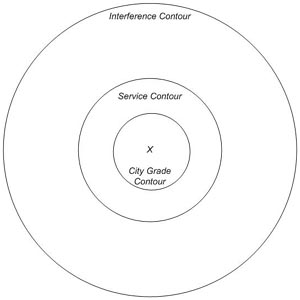 Also sometimes referred to as a protected contour indicates the primary service area of the station. This is the primary area that the FCC protects for FM stations. Most stations including LPFM are protected to a 60 dBu (1 mV/m) contour. For 100-watt LPFM stations (LP-100), this creates a service contour of 5.6 kilometers (km). Certain full power FM stations in certain areas of the country have a larger protected area by extending the service contours to 54 or 57 dBu. Full power stations in Puerto Rico and the Virgin Islands have much larger service contours due to the area's geography. Service contours are measured using a method called F(50,50) meaning that estimated field strength exceeded 50 percent of the potential receiver locations 50 percent of the time at a receiving antenna height of 9 meters. Non-commercial FM rules (not LPFM) require that the community of license be within at least 50% of the primary service contour of the radio station.

The Interfering Contour is a signficantly larger contour. This is a contour that a station has the potential to radiate to but is less likely but there is still a potential for interference. There are different interference contours for co-channel (same channel), first adjacent, second adjacent and third adjacent channels with the co-channel being the largest of the interference contours. Unlike the service contour, the interfering contour is measured using F(50,10) or estimated field strength exceeded 50 percent of the potential receiver locations 10 percent of the time at a receiving height of 9 meters.

In addition to these contours, commercial FM stations also have a City Grade Contour. This is also referred to as a Community Coverage Contour. This contour is intended to show the area where a superior quality signal is available. The City Grade contour for all commercial stations is 70 dBu, which makes it smaller than the service contour. In full power commercial FM rules, a substantal portion of the community of license must be in the city grade contour of the FM station.

How Interference is Determined

The formula for determining interference between two stations involves determining the size of both station's service and interference contours. There is a formula based on the station's power and antenna height above average terrain (HAAT). The distance between the two stations is measured. If the sum of the sizes of the service and interference contour exceed the distance between the two stations, then you have overlap and the potential for interference. In normal full power rules, this measurement must be made both ways. There are additional considerations that are used when directional antennas are used which we will not get into here. Another interference model, referred to as Longley-Rice also uses actual terrain data to determine a station's coverage areas. This model is currently accepted in the digital television rules.

In the past, several groups in the LPFM grassroots had asked the FCC to look at a prohibited overlap model that does take into consideration the actual powers of the stations, directional antennas for either station and other factors. The FCC has interpreted provisions of the Local Community Radio Act to prohibit contour models as it may be seen as "reducing the spacing between LPFM and full service stations". The FCC also feels that the processes for separating LPFM stations from other stations should be as "simple" as possible without the need for contour studies or more complex methods of resolving interference complaints. There are provisions in the LCRA to allow the FCC to use overlap models for waiving second adjacent channel protections and in some limited cases, contours can be used to protect Channel 6 TV stations from LPFM proposals. 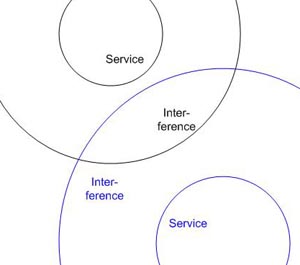 In the commercial rules (as well as the LPFM rules), all broadcast stations as having full facilities with non-directional antennas over flat terrain. Therefore, distance separation tables are used. To determine the distance, we look at the distance from "Station A" to its 60dBu (or 57 or 54 dBu) service contour and the distance from "Station B" to its interference contour and then we add those two distances together. Then we go the other way and look at the distance to Station B's service contour and the distance to Station A's interference contour. The greater of the two distances is then the minimum distance required.  In commercial rules, §73.215 permits stations that do not meet the normal (§73.207) distance separation requirements but meets a shorter distance table to be able to use contours, as depicted above, to show a lack of interference. Such protection must be both ways (from the new station’s interfering contour to the incumbent station’s protected contour and from the new station’s protected contour to the incumbent station’s interfering contour.

How terrain can affect the contour size

When the service and interference contours are measured, they are based on several factors.  If the station has a directional antenna, that is first taken into consideration.  For example, if a directional antenna for a 1kW station only directs 50% of power in a particular direction, then the Effective Radiated Power (ERP) will be considered as 0.5kW in that direction.  Then, height above average terrain (HAAT) is considered.  The FCC makes elevation measurements at various points along a radial in the specific direction being checked and then uses the average measurement to determine HAAT (which we call "effective HAAT").  Then based on the adjusted power (if any) and the HAAT in a particular direction, the distance to the contour is measured.  This is repeated up to 360 times for each possible direction.

If you have a station that is located in the foothills with a large mountain behind you and a valley in front of you, you may get a low overall HAAT because the high elevation of the mountains and the lower elevation of the valley average out (usually in favor of the valley).  As a result, an LPFM station will have a very small contour towards the mountain but towards the valley, the service contour size can extend well past twice the size of the normal 5.6 km service contour size.  HAAT that controls what power the LPFM station can actually operate from takes the average HAAT in 8 different directions and then averages that result.  As long as your overall HAAT is 30 meters or less, you can run a full 100 watts. 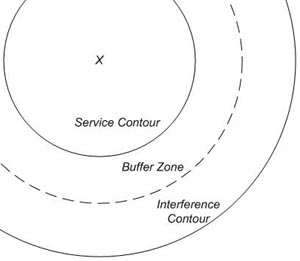 For full power stations, a 20 km "buffer zone" is given. This was designed to permit a full power station to be allowed to change to a different location without causing the two service contours to overlap. Therefore, when the FCC develops the minimum required distance between a LPFM station and a full-service station on co- or first-adjacent channel, it adds the standard distance for a typical LPFM station from the station to the interfering contour plus the standard distance for the full-service station’s class from the station to the protected/service contour and then adds an additional 20 km.

Not all stations are created equal

In order to simplify the LPFM rules, the FCC used minimum distance seperation requirements based on a full-power station's maximum allowed facility.  You may find that not all full power stations (especially Class-C stations) do not operate at the full facilities for their class.  Search tools, such as REC’s myLPFM search will place a message next to these channels on the availability list.   Any reputable consultant or engineer, including REC Networks can look up the interference contours to give you an idea of the field strength of other stations.  Also, you can take a drive around your service contour while monitoring the desired channel for the LPFM station.  You can determine the noise floor.  Just know for very weak stations, the LPFM station may be able to overcome any interference but in fringe areas towards the other station, coverage may be limited.

In addition to the interference restrictions above, the FCC also has a restriction called intermediate frequency. All radio receivers also generate radio frequency. FM receivers normally generate a signal at 10.7 Mhz. Some FM receivers may mix that 10.7 frequency with the signal of a very strong FM station and create interference approximately 10.7 MHz up or down from the strong station. As a result, the FCC has a requirement that full power FM stations, LPFM and translators over 100 watts also protect the IF channels. Since FM channels are spaced every 200 kHz, there is no true FM channel exactly 10.7 MHz above or below the station's frequency. Instead, the FCC protects both the channel 10.6 MHz (53 FM channels) and 10.8 MHz (54 FM channels) above and below the station's frequency. The IF is calculated by taking the sum of the 91 dBu contour (F 50,50) of both stations.

LPFM stations are only required to protect Intermediate Frequency in respect to foreign FM stations.

Full Power and LPFM stations operating in what is known as the Reserved Band from 88.1 to 91.9 MHz must also protect TV Channel 6 stations. Channel 6 protections are measured by adding the sum of the Grade-B contour (which is TV's version of a Service Contour) and a certain interference contour of the radio station. The size of the interference contour is different for each of the 20 channels in the reserved FM band and as you go up in channel, the interference contour gets smaller. In the LPFM rules, all TV Channel 6 stations (both full power and low power) are considered having full facilities (even though only a dozen low power TV stations have anywhere near full facilities).  We do note that the current rules for Channel 6 protection, while written for analog TV also apply to digital TV.

Effective in the summer, 2020, LPFM stations wishing to use a reserved band channel but do not reach the minimum distance separation to the TV facility can either (1) obtain permission by the TV station licensee to short-space the TV station or (2) request a waiver by conducting a contour study to demonstrate that the LPFM station does not interfere with the TV station using the same method that FM translators use.  If a waiver is requested, the LPFM applicant must send a letter to the address of the licensee of the affected Channel 6 TV station to advise them that a waiver has been requested.

‹ Introduction to LPFM up Extending your Construction Permit ›
REC Essentials
Other REC sites
The More You Know...
REC Suggests