Radio reception is about to get better on Pacific Coast Highway in Malibu.  Zuma Beach Emergency FM Broadcasters, an REC advocated station in our Southern California area of interest was granted today by the FCC, two new construction permit applications for FM boosters for KBUU-LP, Malibu, CA.  KBUU-1 will be located in Malibu Bluffs Park through an arrangement with the City of Malibu and will serve the eastern portion of Malibu including the Malibu Civic Center and Pepperdine University.  KBUU-2 will be located at Trancas Canyon overlooking Zuma Beach and will provide enhanced service to the Ventura County Line.

The two booster authorizations come in the wake of the 2018 Woolsey Fire, which in its path, destroyed over 1,500 structures in Los Angeles and Ventura Counties.  KBUU-LP is currently working with Santa Monica-Malibu Unified School District and the non-profit Malibu Foundation to construct an "off grid" data network that will span from Malibu to Santa Monica.  The network will also carry KBUU programming from their studio (also the location of KBUU-2) to their primary transmitter and to KBUU-1.  KBUU's main transmitter site was recently converted to solar power.  Prior to the fire reaching Malibu, KBUU-LP was on the air giving instructions and information to the community.

Unlike other parts of Los Angeles, Malibu is in a unique situation that many residents live in canyons or are otherwise terrestrially sheilded from the main FM station transmitter sites at Mount  Wilson, Verdugo Peak, Flint Peak and the Hollywood Hills.  All Los Angeles FM stations place a marginal signal into the Malibu area and with the increase in electric vehicles, fewer cars are equipped with AM radios.  KBUU-LP also faces terrain challenges.  Recent field studies conducted by REC in the Malibu area demonstrated the need to extend the coverage of the station with boosters.  Because of the terrain surrounding KBUU-LP, the station's primary service contour covers a very long stretch of the famous "PCH".  Despite KBUU-LP's "sombrero"-shaped service contour, hard intervening terrain limits the signal to only one part of Malibu.  The two boosters will fill in the additional areas along PCH within the primary station's contour.

REC supports the efforts of KBUU-LP as this will best demonstrate the utility of LPFM and the use of boosters in these exceptional circumstances.  For these applications, REC made a waiver request citing the unique terrain, the lack of "big" radio in the area, the area's vulnerability to natural disaster as well as the support from the community and the public sector in the overall project.

KBUU-LP will have three years to construct these boosters but they plan to do so much sooner.  REC supports KBUU-LP's efforts and will continue to provide extended support to the station.

Even though obtaining these two boosters for KBUU-LP required a long-worded waiver request, the FCC is currently considering, at REC's request, in MB Docket 19-193 to permit LPFM stations to operate boosters without the need to make a compelling waiver request.  The boosters would be counted towards their ability to own up to two FM translators.  Comment dates in the proceeding have yet to be set.  REC reminds everyone that boosters for LPFM stations are only effective in rare situations.  Because of the terrain and high occurences of "foothill effect" ("higher" level sites with low HAAT because of higher mountains behind and a deeper valley in front), Southern California is an excellent candidate for boosters.  Now, 4 REC adovcated stations in Southern California (KWSV-LP, KXRN-LP, KQLH-LP and KBUU-LP) have been authorized boosters with KWSV-LP-FM1 already on the air. 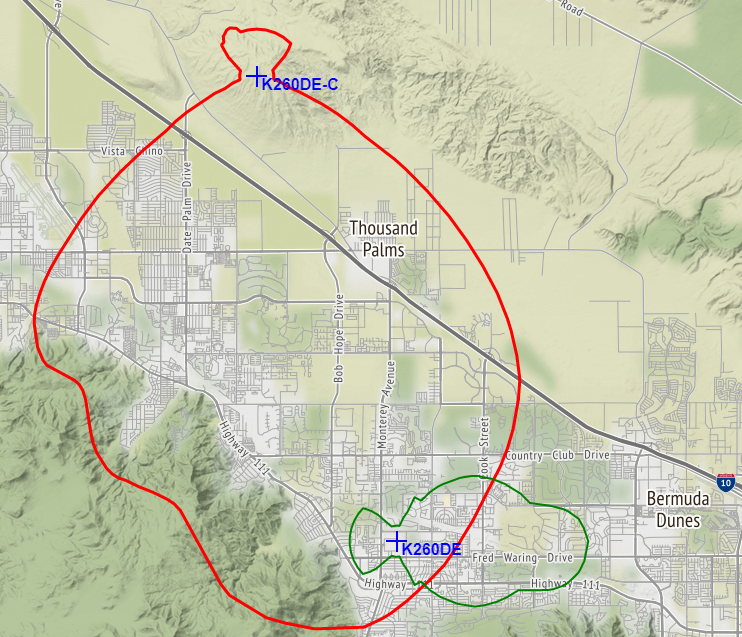 A few hours away in the Coachella Valley, KCOD is a noncommercial student-operated AM broadcast station on 1450 kHz operating 960 watts non-directional, day and ngiht.  The station is operated by the College of the Desert.  During AM Revitalization, KCOD obtained a 50-watt translator that was situated on the college campus.  Because of the second-adjacent channel rules, the translator was limited to a low level directional antenna with mediocre coverage.   KCOD came to REC in order to get help in improving their coverage.  The problem was that KCOD faced co-channel overlap to the west of the desired coverage area  in Cathedral City, Palm Desert and Rancho Mirage because of a co-channel grandfathered super-power FM station in the San Bernardino area.  Under the regular application of the rules, operating at a more desirable site would not be permitted because of contour overlap.

FCC rules do allow for the ability to use intervening terrain in the event of overlap.  Also, past FCC decisions, dating back to the early 1960s state that the additional protections (above that of a full-Class B station) provided to super-power stations must not hamper future development of the medium.  KCOD was able to secure a site on a tower at Edom Hill, one of the main transmitter sites for Palm Springs area broadcast stations.  From that site, REC was able to propose a directional antenna at 60 watts that was able to meet the contour overlap rules if the super-powered station was treated like a standard Class B station.  In addition, REC was able to make a showing that there was substantial intervening terrain (the San Jacinto Mountains) blocking the Cochella Valley from the Inland Empire of San Bernardino and Riverside.  The new site would result in a substantial population increase and result in the new the service area of the proposed translator modification being completely inside the 2 mV/m contour of KCOD(AM).

Today, while REC and KCOD were expecting to be in for a very long wait, the FCC Audio Division granted this application.  KCOD will have three years to construct this facility.  This facility is subject to no interfrence to the co-channel San Bernardino station or any other station.

REC Networks specializes in out of the box solutions for LPFM, FM translators and even full-service.  Please give us a try.  1-844-REC-LPFM.